What a year it has been for the team at DeliverThat, taking more deliveries than ever while expanding nationwide. January of 2018, DeliverThat set out to to establish a set of goals that would take the company across the United States. Focusing on cities that have the highest volume per restaurant , the locations that were first on the list were Baltimore, Denver, Philadelphia, and Phoenix. Strategically selected based on geographical location as well as order volume, the tea
112 views0 comments 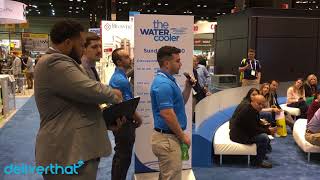 What a week! The DeliverThat team traveled to Chicago Illinois to attended the 2018 National Restaurant Association show. Going into the show the team knew that this was hosted at a large convention center but large was an understatement. Spanning over three different wings of the building, the McCormick Convention Center houses 2.6 million square footage of exhibition space, three days at the show was still not enough time for the team to scour every isle of the show. Day 1
91 views0 comments
David Hoffman

The newest team member of DeliverThat, Darien Terrell is a very exciting addition. We are thrilled to have such a motivated and talented individual join the DeliverThat team. There are many qualities about Darien that make him a perfect fit. From the short time Darien has been on-board with the DeliverThat company, he has proven to be invaluable with his innovative ideas and superior work ethic. Darien went to college at Eastern Michigan University via an athletic scholarship
265 views0 comments
David Hoffman

DeliverThat had a very successful month in February and saw expansion into the city of Indianapolis. The total amount of territories DeliverThat covers is now at 7 which include; Cleveland, Akron, Canton, Cincinnati, Columbus, Pittsburgh, and Indianapolis. It's very exciting being a part of the aforementioned growth as it brings new challenges and new opportunities. This growth has been welcomed by the DeliverThat team; however, it has not come without its own unique challeng
71 views0 comments
David Hoffman

It takes a unique type of individual to not only identify a problem but also identify the solution as well. DeliverThat's CEO, Aaron Hoffman has done what many couldn't time and time again. He has many unique qualities that make him a puzzle piece fit for the position he holds. What drives and motives him most likely doesn't resonate with that of a typical person. The reason people like him are so few and far in between simply reduces down to work ethic and the ability to dis
256 views0 comments
David Hoffman

The week of 1/29 was an exciting one per usual! From fulfilling deliveries in a blizzard to launching a new market, there hasn’t been a dull moment. Expansion was at the forefront of our collective mind as we launched our new territory, Indianapolis. Indianapolis offers such a unique opportunity for not only potential drivers, but for restaurant partners in general. The city is flooded with professional buildings and other catering hotspots. It’s no wonder why we’ve been abl
48 views0 comments
David Hoffman

DeliverThat's logistics management software provider, Onfleet, has achieved a distinguished milestone of ten million deliveries. This delivery milestone is a benchmark that warrants a tremendous amount of recognition. Onfleet struck the one million delivery milestone previously in early 2016. Under two years time, that number has increased tenfold. You ask how? It’s companies, like DeliverThat, that have leveraged the software’s capability. DeliverThat is proud to have such a
74 views0 comments
David Hoffman

As one of the founders of DeliverThat, John Zinno has helped forge the foundation of which DeliverThat was built upon. His hard work and dedication have been welcomed and embraced by all of those he has hired and helped train. There is a passion for success that lies deep within John and it's seen readily apparent by all, regardless of the task at hand. The aptitude for business John possesses is fundamental in growing the DeliverThat franchise that he helped create. John not
145 views0 comments
bottom of page